This article originally was published by Education Week on September 25, 2018. It was written by Evie Blad and appears below in its original entirety including video and image

, administrators, and police officers sat in rows at laptop computers, enacting a scenario they hope to never experience in real life.

On their screens were three-dimensional models of classrooms, a science lab, angular intersections of school hallways. The users, each representing a character in the simulated school, wore headsets that filled their ears with the sounds of gunfire and echoes of students screaming.

Through attached microphones, they spoke to each other as they pressed key commands to evacuate classrooms out of windows, barricade doors with furniture, or ask frightened students to hide behind desks.

The group was testing a computer simulation to help schools train for crisis events, including school shootings. The U.S. Department of Homeland Security, which developed the software with the U.S. Army, has beta tested it with groups of educators around the country to make final adjustments before it’s offered free to schools nationwide Nov. 1.

On this day, educators and school police from six New Jersey school districts spent hours running through different scenarios. At times they laughed as those without video game-playing experience struggled to animate their on-screen avatars, clumsily hitting keys to make them walk or interact with students.

At other times, the room fell quiet as each user became engrossed in the very serious scenario on screen.

It wasn’t real, but it felt so in certain moments.

“Show me your hands!” a school resource officer yelled into his microphone, his real-life training kicking in as his avatar ran through the simulated hallways, a handgun extended before him, searching for a student who’d shot a teacher.

“You go back to your learned experiences when you’re in a crisis event,” said Milt Nenneman, manager of first responder coordination for the Homeland Security Department’s science and technology directorate.

The intent of the simulator is to provide a high-tech “sandbox” that allows first responders and educators to practice that prior training together, each in their respective roles, he said. The program allows trainers to pause scenarios and to replay them, showing how all characters responded to events.

Statistics show that most schools will never experience , and even fewer will experience a random, rampage-style attack like those in Parkland, Fla., in February, and Santa Fe, Texas, in May.

But educators are spending an increasing amount of time training for such unlikely events.

Though there’s rising public concern about shootings, federal data show that violent deaths in schools have not increased significantly over that time period.

Still, policymakers often respond to the most horrific, and rare, acts of school violence by passing new training mandates for schools and first responders. And many of those policies focus on cross-training and collaboration between agencies.

A new Illinois law, for example, requires schools to include local law enforcement in at least one of their annual safety drills. In Texas, law enforcement agencies do live training in school buildings to refine their response protocols.

In West Orange, police and district officials previously used a $140,000 grant from the Homeland Security Department to stage a simulated shooting in a school, using paint guns and actors, said Lt. John Morella, who supervises the city’s school resource officers. After playing the simulator for a day, Morella said it may provide a lower-lift way for officers to train.

“It’s a great training tool,” he said. “It’s not as much effort, and we can still have the same dialogue.”

The program is called EDGE, which stands for Enhanced Dynamic Geo-Social Environment. The first version of EDGE allowed first responders to train for events like shootings, fires, and bombings in a luxury hotel. Inspired by the 2008 attack on a hotel in Mumbai, India, that simulation is based on a real hotel, down to the art on the walls.

The school version of EDGE takes place in a school modeled on an actual middle school building in West Orange. Software designers used floor plans of the building and took thousands of photos of all its features, zooming in on textures like floor coverings to help them generate accurate renderings, said Bob Walker, the program manager of Orlando-based Cole Engineering Services, which designed the simulator. 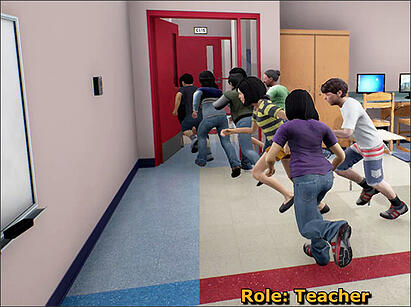 Developers also reviewed security footage from the 1999 shooting rampage at Columbine High School, listened to 911 calls from other school shootings, and interviewed the mother of a victim of the 2012 shooting in Newtown, Conn., as they developed the program. It cost about $2 million to create the school version of EDGE, building on the same technologies already developed for the earlier hotel version.

Developers are quick to say that EDGE is not a video game, but a viewer could easily mistake it for one.

Many of the developers who made EDGE previously worked on popular video games. It was built with Unreal Engine, a tool which was also used to develop games like Doom and Fortnite, a popular shooter game played by many of today’s students.

EDGE allows users to take on roles of first responders, police, school resource officers, teachers, 911 dispatchers, parents, and students. Users can also play the role of an assailant equipped with a menu of weapons—handguns, a semi-automatic rifle, even a pipe bomb.

In their roles, users interact with student characters who are powered by artificial intelligence that causes some to be obedient and some to cower in fear and noncompliance when users select from an on-screen menu of commands to tell them to hide or escape out a window. Police can respond with a variety of weapons, communicate via their own radio channels, and even fog up another user’s vision by spraying their avatar with pepper spray.

Because the program’s school model may differ significantly from a district’s actual buildings, the program can’t replace in-person training such as drills and in-service sessions in which trainers demonstrate response protocols and talk through scenarios, said Amanda Klinger, operations director of the Educators School Safety Network, which helped consult on the EDGE program.

The program is just another “tool,” she said, but it relies on previous training and school safety policies. And the real learning takes place in thoughtful conversations and reviews after a group of users finishes a simulation, Klinger said.

“The tool is incredibly powerful, but everyone learning something from it doesn’t happen by accident,” she said. “They shouldn’t be doing this if they haven’t had that in-person training.”

Homeland Security plans some demonstration videos to help educators learn how to use the program and how to role-play some common scenarios.

Klinger typically played the role of the suspect in the simulation with the New Jersey educators. The game’s developers recommend that role is played by someone in law enforcement or a school safety trainer. Beyond active-shooter scenarios, she also challenged participants to use the simulator to practice how to respond to situations like a student who’d shot himself in the bathroom and a stranger found wandering the hallways unattended.

“It’s a tragedy when we have situations like Parkland,” Klinger said, “but if you have a kid who dies from anaphylactic shock in your cafeteria, that’s tragic too.”

The simulation, like most safety training methods, doesn’t allow for the “bias of normalcy” that can slow responses in real-life situations. Because participants know they are training for safety threats, they don’t assume the sound of gunshots is a car backfiring outside, as they might in real life. That can cause users to respond with more intensity in the simulation than they may use in person. At one point, several New Jersey educators using the EDGE simulator took to the school intercom to call a full lockdown when they saw a parent walking in the hallway.

Michael Cardillo, an elementary school music teacher in Fairfield Township, N.J., participated in the testing session. He said the program simulated some of the real chaos educators may experience during a crisis because EDGE limits what users can see and hear depending on their proximity to events like shootings. In one exercise, some teachers thought they were merely responding to rumors of a fight in the cafeteria and didn’t realize other users were chasing a student with a gun until they reviewed their responses afterward.

“I think, if everyone keeps an open mind, it opens a discussion,” he said.

Since the Parkland shootings, some student activists have been skeptical about the federal response to school safety, especially panning a lack of action on gun laws and a lack of funding for research into the causes of gun violence.

After news recently broke that the Homeland Security agency had issued grants to help high school students train to stop traumatic bleeding, citing school shootings as a motivator, young activists criticized the move. They said it made shootings seem inevitable, rather than preventable.

And some school safety consultants have said expensive equipment and programs aren’t as necessary as simple steps schools often fail to take, like holding lockdown drills during more disorderly parts of the school days such as passing periods or lunch instead of during class time.

In response to the Parkland shooting, U.S. Secretary of Education Betsy DeVos is chairing a federal school safety commission to develop best practices for school safety. That task force has focused heavily on “hardening schools” through beefed up physical security measures. Homeland Security’s plans to develop EDGE predate that commission and the Parkland and Santa Fe attacks.

Michael Dorn, a school safety consultant and executive director of Safe Havens International, said EDGE could be a helpful tool for schools if they don’t focus too narrowly on shootings when they use it.

In a similar manner, Dorn uses videotaped scenarios with actors, pausing at certain points to ask teachers questions about how they would respond. The point is not to test the teachers as individuals, but to determine how they have processed the safety training they’ve received from their schools and to identify areas for improvement, he said.

“If 90 percent of these scenarios are shooter, I’d say it’s going to make people less prepared” by causing them to overreact, Dorn said.

And, recognizing that teachers have a variety of experiences with violence and trauma, none should be obligated to participate in a computer simulation, he said.

“What might not even rattle one teacher will have another one not sleeping for three days,” Dorn said.

After a full day of trying out the program, René Rovtar, the superintendent in Montville, N.J., said she wouldn’t require any teacher to participate, particularly if they are uncomfortable with simulated violence.

EDGE could provide another way for district officials and police to run through scenarios and discuss responses, which they currently do in a “tabletop” format that mostly involves conversation, she said.

“This just adds a different dimension,” Rovtar said. “You can quickly identify things that didn’t go according to plan.”